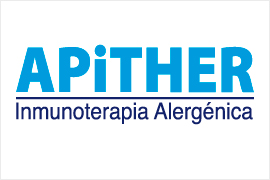 Allergies, also called hypersensitivity reactions, are responses of the immune system (the defenses of our body) to come into contact with substances called allergens which are usually tolerated by most people. These are frequent pathologies that affect more than 25% of the world’s population according to the World Health Organization (WHO). In addition, over the last several decades, changes in the environment, habitat and way of life and a greater number of pets have favored the progression of allergy. Immunotherapy, also known as hyposensitizing therapy, reduces the sensitization of patients by attenuating the symptoms they experience in contact with the allergen. Immunotherapy is usually effective, the improvement is observed a few months after having started the vaccination, becoming apparent around the first year of treatment.


Treatment with allergen vaccines consists of progressively applying repeated doses of the allergen to which one is allergic in order to diminish or eliminate the reaction that occurs when coming into contact with it. Allergenic vaccines are able to modulate the patient’s immunological response, thereby changing the natural course of the allergic disease mediated by the production of IgE antibodies, with a long-term lasting effect after the end of treatment. This type of immunotherapy is used to treat allergy cases caused by pollen, dust mites, animal epithelia and certain fungi. 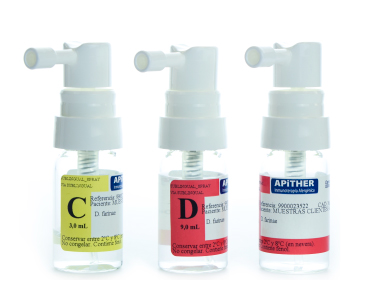 
Sublingual treatment offers an effective and safe alternative for those patients who are not comfortable with subcutaneous application, or who prefer a home self-management treatment. This treatment consists in using a Spray dispenser to apply a specific amount of solution with the allergens under the tongue, where it must remain for 2 - 3 minutes until it is absorbed. Sublingual Apither is prepared individually for each patient, because each person has a different sensitization to allergens, so it is up to the doctor to assess the Sublingual Apither composition in each case.

Sublingual Apither is used to treat allergic illness that occurs with rhinitis, rhinoconjunctivitis and/or seasonal or perennial bronchial asthma produced by inhaled allergens.

It is supplied in spray dispenser bottles in two formats:

The following formats are available: